With the recent shift to remote work and the precipitous increases in the cost of living in many areas of the United States, it seems like more Americans are on the move than ever before.  In fact, according to the U.S. Census Bureau, an estimated 7,398,337 Americans moved to a different state in 2019 alone.

These interstate migrations have been blamed or linked to a number of changes or problems, including political shifts, cost of living increases in rural areas, and recent increases in crime rates among others.  Recently, much ink has been spilled over residents of high cost of living areas like California moving to more affordable areas in Texas, Arizona, Idaho, and Nevada.

However, are these movement patterns unusual?  Working with 1Point21 Interactive, we examined 170 years of U.S. Census data to visualize the history of where Americans are born. This chart shows the place of birth of state residents from 1850 – 2020.  The dark blue represents those who were born in the state they reside in, light blue shows those born elsewhere in the United States, and red shows those born in a country outside the U.S. As you can see, several states, such as Alaska, Hawaii and Nevada, did not achieve statehood until partway through this time period.  As a result there is no data available from 1850 through the year that they officially became a state.

Click here to view a table with data for all states.

Birthplace patterns vary greatly from state to state for a whole host of reasons.  Below are a few examples and explanations for why the chart looks the way it does. 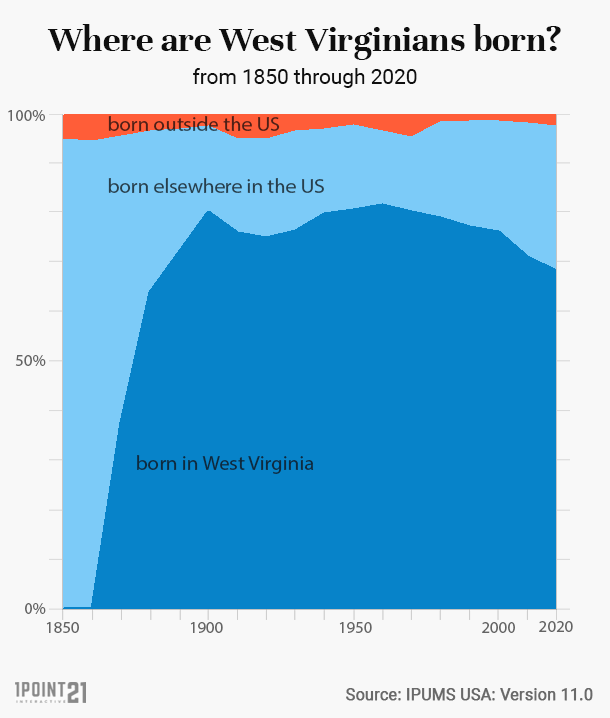 Born Outside the United States

For simplicity, we lumped all foreign-born Americans together in the visuals above. However, the makeup of America’s foreign-born population has changed significantly over time, from Europeans flooding in during the 1800s, to today’s more diverse mix.  This chart shows that change over time and where Americans are from. Prior to 1900, the Census did not reliably include Native Americans. In 1860, it began including Native Americans living in the general population, and in 1900, it included those living on reservations as well.

Pre-Civil War data for enslaved people is also unreliable. While they were included in censuses, their names, ages, places of birth, and other important information was not. Treat the early data for slave-holding states with caution, as it is very likely inaccurate.

If you would like to report on or republish this analysis, please cite our work by linking to this page.